The Forest of Witches, close to Moomin Valley

Alice (also known as Aliisa in the Finnish/Swedish translations, Alicia in the English dub of the 90s anime) is the witch's granddaughter and a witch in training, and develops several magic skills, most notably walking on water, underwater breathing, and lightning speed, which creates a powerful wind that blows everything she passes by. Alice is young, and she dresses in grey, and her greatest dream is to become a certified witch. Alice is a good friend of the Moomins, but her grandmother wants Alice to pay more attention to her studies rather than spend her time playing with them. Alice still manages to escape to meet with her friends.

Moomin Episodes in which Alice Appears

Aliisaa is seen almost immediately at the beginning of the episode. Moomin, Snork Maiden, Little My, Snufkin and Sniff go on a walk before the winter and meet her on the road. Alice is seen a second time at the end of the episode when she goes to fetch water from the river.

The Moomins go on a trip before Christmas, meeting up with Alice and the Witch.

Alice is seen in this episode. She is seen at the outset, through a dream which Moomin has in which he flies with Little My.

The second time is when the episode moves into the Forest of Witches. Alice really wants to fly, and while she cannot actually do so, the Witch creates a levitation spell so that she stays in the air.

The third time she is seen is when she skis to meet Moomin at Moomin House, but finds he isn't there.

Alice is seen for the fourth time when, again, she is skiing. She runs into the Hobgoblin and cries out for help, but Moomin manages to scare him away.

Alice appears once again when she visits Moomin and the Snork with Too-Ticky. Moomin, Alice, Snork and Tuutikki then go to watch the bonfire.

The final time Alice is seen is when she says goodbye at last to the Moomins and skiis home.

Alice is seen when she visits Moominhouse, to investigate why the sleeping residents aren't waking up.

Alice is seen only once when she walks with Moomin and Snufkin. They meet the Witch in the Forest, where she sells them a bucket containing a variety of plants.

Alice is seen when she comes to stay at the Moomin house whilst her grandmother departs for the Lonely Mountains in order to obtain more power.

Alice is going to visit the Moomins again, and on the road she encounters Snufkin who she talks to at the hotsprings. Alice then goes with Moomin into the woods, where the Witch speaks viciously about the suitability of Moomin Valley for the hotsprings.

Alice is seen only once, when she asks Moominpappa and Snufkin to rescue the Witch.

In this episode, Alice learns a new trick by the Witch; how to walk on water. While on her way to show Moomin the trick, Alice learns another trick and starts becoming faster and faster as she runs, so fast that she creates a powerful wind everywhere she goes and almost runs over Sniff. Little My asks Alice whether she can swim before she tries to walk on water, to which Alice replies that she does not know how.

Alice comes to stay with the Moomins at Moomin House for the night, while the Witch travels to see the volcanoes.

Alice uses her ability to walk across water once again.

Alice saves Tiuhtin after he falls into a river, before taking him to Moominhouse. He says he will keep the flower he got until it begins to grow.

Alice is first seen looking out the window.

The second time Alice is seen is when Moomin and Snufkin came to ask for her help so that they can save the Hemulen's garden, but they end up being hurt with hail. Snufkin that there is magic involved, and asks Alice whether he too can become a magician.

In this episode, she comes to visit Moominhouse and speak with the Moomins.

"Towards the South" is the last episode in the series in which Alice is actually seen. She is first seen when she says she wants to help Moomin and the Snork fly their aircraft, but the Witch refuses to allow it. Alice is seen shortly before the end of the episode where she says that she will see the Moomins again come spring. Alice is seen for one final time when she flies away with the Witch, and she sees the Snork piloting the aircraft to the south. In the end, Alice and the Witch arrive at a cave where another mysterious witch grants Alice her own broom at last. 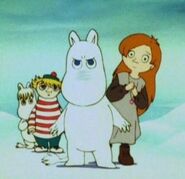 Add a photo to this gallery
Retrieved from "https://moomin.fandom.com/wiki/Alice?oldid=11476"
Community content is available under CC-BY-SA unless otherwise noted.