Billy the Kid is one of the antagonists in Moomin anime series from 1990-92. He is the one bank robber from the Time of Wild West.

He appears in Episode 17 of the Second Season that was never translated, in an Episode called "Moomin in Cowboy Country" (ムーミン西部に行く)

He vaguely resembles Snufkin, except he is blonde and is a bit tanner. He wears a brown cowboy hat and the rest of his outfit is very similar to a typical cowboy outfit. He also has two pockets on the sides to hold two pistols. 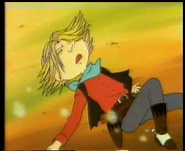 Add a photo to this gallery
Retrieved from "https://moomin.fandom.com/wiki/Billy_the_Kid?oldid=11324"
Community content is available under CC-BY-SA unless otherwise noted.