Comet in Moominland (Swedish: Kometjakten / Mumintrollet på kometjakt / Kometen kommer Literally: The Comet Chase / Moomintroll on a Comet Chase / The Comet is Coming) is the second in the series of Tove Jansson's Moomin books, published in 1946.

The English language book is a translation of the first version of Jansson's book, which she was later to revise in 1956 and 1968. The revisions contain a number of minor differences; for instance, the Silk Monkey character is changed to a kitten.

The story begins as the Moomin family are settling into their new life in Moominvalley. Sniff, who is now living with the Moomins, discovers a mysterious path in a nearby forest. As he and Moomintroll explore it, they meet the mischievous Silk Monkey and arrive at a beach, where Moomintroll goes pearl-fishing. Meanwhile, Sniff and the Silk Monkey find a cave, and the three decide to hide Moomintroll's pearls there.

The next day, as they go back to the cave, they find the pearls arranged in the shape of a star with a tail. Back at Moominhouse, the Muskrat, a philosopher whose home was ruined by Moominpappa's bridge-building and who is now staying with them, explains that the pearls depict a comet. He directs Moomintroll to the Observatory on the Lonely Mountains, where the Professors would be able to tell him whether the comet will hit the Earth.

Moomintroll and Sniff set sail towards the Lonely Mountains, and on the way they meet Snufkin, who joins them. The river takes them into a cave under the mountains where they almost fall into a hole, but at the last moment a Hemulen inadvertently rescues them when he mistakes Snufkin's harmonica-playing for a rare caterpillar and reaches his butterfly net into the cave to catch it. They find themselves in the Lonely Mountains and set off towards the Observatory. On the way they are attacked by an eagle and Moomintroll finds a gold ring, which Snufkin tells him belongs to the Snork Maiden he had met a few months earlier.

At the Observatory, one of the professors tells them that the comet is going to hit the Earth, and gives them the exact date and time that it's going to happen. Realising they only have a few days left, they hurry back towards Moominvalley, noticing that the heat from the comet's approach is starting to dry up smaller streams. In a forest they come across the Snork Maiden being attacked by a poisonous bush. Moomintroll saves her, and she and her brother join them. Further on, they arrive at the sea to find it all dried up. They use stilts to cross it, and the Snork Maiden saves Moomintroll from a giant octopus.

On the other side of the sea they meet another Hemulen, and manage to survive a tornado by using his dress as a glider. Finally they arrive in Moominvalley and the whole family, together with the Hemulen, the Muskrat and the Snorks, go to the cave, making it there just in time to seek shelter from the comet. Believing the impact to have destroyed everything, they fall asleep, only to discover the next morning, to their great delight, that the comet had missed the Earth altogether and everything is back the way it used to be.

In 1947-1948 Jansson made a comic adaptation for the Swedish-language newspaper Ny Tid, which made changes such as the first ever appearance of the Groke and Thingumy and Bob, Snufkin living in a tin can, the Snork being absent and the family surviving the comet by building two large floating orbs instead of hiding in a cave.

Jansson also wrote and illustrated a black-and-white comic strip version for newspapers. The 86 day story does not follow the book plot, for example, the Moomins get their news from a radio, not a trip to the observatory, and Little My appears throughout the story, albeit often observing. In this version the comet hits Moominvalley dead on, laying the landscape bare. Right away, however, flowers bloom, and life begins again.

Comet in Moominland has been adapted to film and television four times.

The Polish 1977 version was restored with updated effects and cut into a feature length film in 2010.

In 1949, the story was made into the stage play Moomintroll and the Comet. 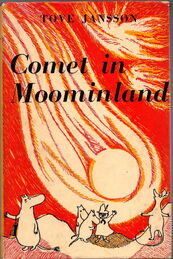 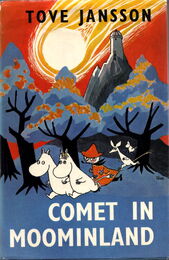 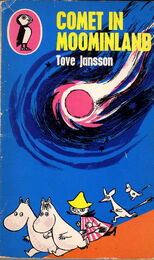 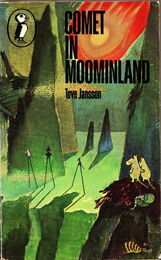 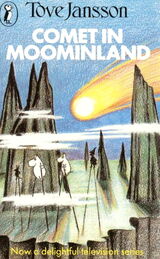 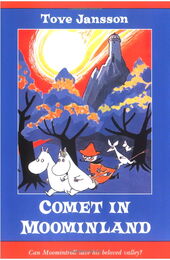