Edward the Booble (Swedish: Dronten Edward) is a gigantic creature who appears in Moominpappa's Memoirs. Despite his intimidating size, he is a very nice and gentle creature who takes care not to step on people. If he ever accidently steps on someone, and killing them, he makes sure to fund the funeral and cries a whole week afterwards.

Hodgkins and Moominpappa uses Edwards extreme size to their advantage when they launch the Oshun Oxtra, by tricking him into taking his saturday bath in the river instead of the lake. This causes the river to overflow, taking the Oshun Oxtra along with it. However, Edward has very sensitive feet and rear, which get hurt when he sits down on the sharp rocks of the river floor. He then tracks Moominpappa and his friends later on in the story, most likely planning to flatten them, but changes his mind when he receives a soft cloud to use as a pillow. Towards the end of the story, Edward unknowingly saves the crew from a terrifying sea monster by stepping on it.

In the Tales from Moominvalley short story The Hemulen Who Loved Silence, Edward makes a cameo appearence, where it is mentioned that he wins first price in porceline destruction at the Hemulens theme park.

Another booble appears in Who Will Comfort Toffle?, who's on vacation and lays out fishing nets with 19 whompers. He helps Toffle by confirming that a Miffle had been seen in the area recently.

A booble also appears in the Moomin comic strips. 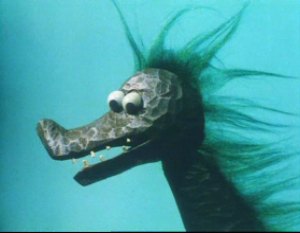 Edward in The Moomins. 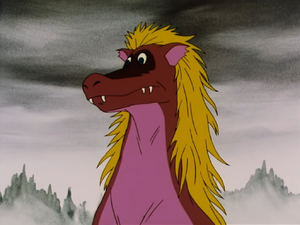 Edward in Tanoshii Mūmin Ikka.
Add a photo to this gallery
Retrieved from "https://moomin.fandom.com/wiki/Edward_the_Booble?oldid=12214"
Community content is available under CC-BY-SA unless otherwise noted.