Little My (Finnish: Pikku Myy, Swedish: Lilla My, Japanese:ちびのミイ) is a character in the Moomin series of books by Tove Jansson. She first appears in the fourth book, Moominpappa's Memoirs. She is a small, determined and fiercely independent Mymble. When she wants something done, she does it immediately. She is very aggressive, mischievous to a fault, and oftentimes disrespectful, but she can be a good friend when she wants to. She has a brash and abrasive personality.

She is Snufkin's half sister and the Mymble's Daughter's younger sister but spends most of her time at Moominhouse with the Moomins, who consider Little My part of their family.

In addition, Little My plays major roles in the picture-books The Book about Moomin, Mymble and Little My and An Unwanted Guest, has a brief speaking role in The Dangerous Journey, and makes a silent (and unmentioned by the narrative) cameo in one of the illustrations in Who Will Comfort Toffle? She's also mentioned a number of times in Moominvalley in November, but since this book takes place roughly at the same time as the trip to the lighthouse island in Moominpappa at Sea, she doesn't actually appear in person.

Little My also shows up as a major character in most Moomin-related media, comics, movies and TV series. She is one of the protagonists in the Moomin anime series from 1990-92. 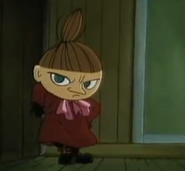 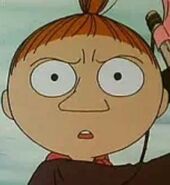 About to be frozen by the lady of the cold 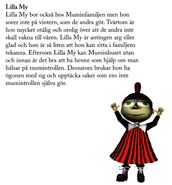 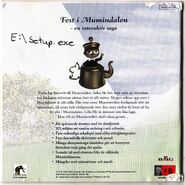 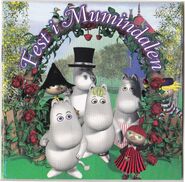 välkommen till fest i mumindalen 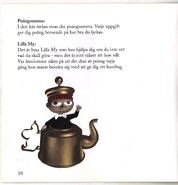 little my inside kettle

little my inside chocolate egg 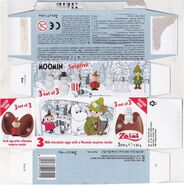 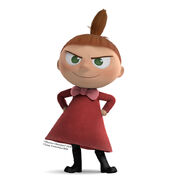 Retrieved from "https://moomin.fandom.com/wiki/Little_My?oldid=12233"
Community content is available under CC-BY-SA unless otherwise noted.