Moomin (楽しいムーミン一家, Tanoshii Mūmin Ikka -- literally, Delightful Moomin Family) is an anime series based on the Moomin book series, produced in Japan by Telecable Benelux B.V. between 1990 and 1992. In all, 104 episodes were made. The series helped to create the "Moomin boom" of the '90s and became one of the two most well-known of numerous series based on the books (the other being the 1977 Polish version, The Moomins).

The series has aired in many parts of the word including the United Kingdom, Ireland, Israel, Poland, Russia, Scandinavia, and Taiwan.

This series was followed by a sequel Delightful Moomin Family: Adventure Diary and the movie Comet in Moominland, based on the book by the same name.

The main character, a spirited teenager with a keen sense of adventure and fun, and a generous spirit. He is Snufkin's best friend. He is secretly in love with the Snork Maiden and expresses his emotions to her discreetly.

Orphaned in his youth, he is a somewhat restless soul who left the orphanage to venture out into the world in his youth but has now settled down, determined to be a responsible father to his family. He is almost always wearing his black top-hat.

The mother of Moomintroll. She is a considerate and stoic mother, a good host to guests and makes efficient medicines from a book she inherited from her mother. Moominmamma is almost never without her handbag.

Moomintroll's fair beautiful lady friend and admirer. But she does have a crush with others sometimes, but returns to Moomintroll before things get too serious. She is gentle and wise, very dependent on Moomin and generally she is very optimistic. She is loyal to her brother Snork, and cares for him. The Snork Maiden and Snork are 'Snorks' - a sub species of the Moomins.

The Snork Maiden's brother, also friends with Moomintroll. His character is obsessing over details, rules and protocol in the books. He is a scientist who tries to build a flying ship.

Moomintroll's immature friend and later adopted brother. He is one of the few characters who is sincerely interested in money, and is always on the lookout for another way to get rich quick. Sniff is a 'Sniff' - a species who resemble kangaroos.

Moomintroll's best friend, who goes south every winter and returns in the spring. Snufkin is an adventurer and a vagabond, admired by those who are small and shy. He has a great dislike for authority and is shown to be very reserved and introverted while being seen by others as wise and clever.

A small, mischievous and spiteful "tomboy" little girl who is not afraid of anything. My is the little sister of the Mymble. When she wants something done, she does it straight away. She is very aggressive and often speaks rudely, but can be a good friend. She has a brash personality. She is red haired and her hair is always gathered in a pony tail. She always wears a simple red skirt.

A senior from 'Hemulen' species which is an avid collector. He used to collect flowers and stamps and then became a Birdwatcher. He is good hearted person yet pitiful due to the unstopping pranks of Stinky. He helps Moomin and the Snork Maiden whenever they are in need of help. The Hemulen's Aunt raised Moominpappa in an orphanage. Other characters frequently find the Hemulens annoying or overwhelming, as they can be somewhat loud, bossy, abrasive and insensitive, but they are well intentioned and usually have other redeeming qualities. In the books he is known as "The Hemulen".

The opposite of the Moomin family. Not a single moment of fantasy or joy, only duties and discipline. She is an extremely methodical person tied down with principles and has a deep rooted belief in prestige and tradition. But in a catastrophe, Fillyjonk may behave totally irrationally. Deep inside she probably has a wish to live like the Moomin family, without any worries. She is most often accompanied by her three children.

Later known as simply the Mymble, she is the oldest of Mymble's many children. Every bit as independent as her youngest sibling, little My, but much calmer and more mature, Mymble's daughter is very proud of being the oldest sibling, and considers it her duty to raise Little My.

A by-the-book Hemulen in charge of law enforcement in the valley. He has a crush on Mymble.

The Witch looks quite scary but is a harmless old lady after all. For a long time she's unfriendly towards the Moomins and is against her granddaughter, Alice, spending time with them. She warms up to them somewhat after they help her out on a few occasions, though, and allows Alice to see them when not busy with her training.

Alice, the Witch's granddaughter and witch-in-training, likes the Moomins and plays with them on the sly whenever the Witch is otherwise occupied.

She is cold and ghostlike, and represents loneliness and all that is scary in the world of Moomin. She seeks warmth and fire, but is unable to do anything but to put them out. Although she has a scary appearance and is dangerous to get close to due to the cold that she's radiating, she's not really evil. .. Just very lonely.

Small white ghost-like creatures that resemble worn socks. Hattifatteners are always on the move and travel in large groups (but always in odd numbers), such as boat convoys. Their only goal in life is to reach the horizon. During their travels they never say a word to each other, and it's doubtful that they have the ability to talk at all, they seem to communicate solely by telepathy. The Hattifatteners cannot see very well, but their sense of touch is very strong, and they can feel ground vibrations and electricity. Hattifatteners assemble once a year when they "recharge" in a thunderstorm. At this time they should be avoided since they are highly charged and can give you electrical burns. Despite physiologically resembling animals, Hattifatteners grow from seeds. Planting Hattifattener seeds where someone has taken up residence is an effective way to get rid of him/her.

A powerful magician who travels the Universe with his flying panther, looking for the King's Ruby. His hat is found in the Lonely Mountains by Moomintroll, Snufkin and Sniff, who take it back to the Moominhouse. Chaos ensues, as anything you put inside the hat is transformed. Moomintroll himself is changed into a strange creature by the hat when he uses it to hide in during a game. The Hobgoblin himself appears some episodes afterwards to take his hat back, and then even later when Thingumy and Bob are revealed to possess the King's Ruby. The Hobgoblin seems dark and imposing, but is really quite fair-minded and kind. He has the ability to grant wishes, however it only works for others and never himself.

Voiced by: Isamu Tanonaka & You Inoue

Two little creatures who turn up in Moominvalley with a large suitcase, which contains the King's Ruby. They speak a strange language and are pursued by the Groke who wants the contents. They upset Moominmamma by stealing her handbag. They eventually return it and the whole family throws a party to celebrate. The Hobgoblin arrives when Thingumy and Bob open the suitcase, exposing the King's Ruby for all to see. While they didn't give him the ruby, when the Hobgoblin gave everyone there a wish they wished for the Hobgoblin to have a ruby as beautiful as theirs; the Queen's Ruby.

A criminal by profession, trickster, and a dangerous influence who tempts the Moomin family to do things that are against the law. He has a code of conduct of his own, and is offended when the Moomins want to give him a large sum of money which has been causing them much trouble. Physically, Stinky looks like some sort of furry mammal, whose most characteristic attribute is his constant, unbearable stench, which also reflects his general attitude. His tricks are cruel and often dangerous - such as releasing wild animals from the zoo so they can get the Moomin family, or pressuring the Fillyjonk children into using a perilous rope swing.

Mother of Little My, Snufkin, and The Mymble's Daughter. She has many, many children, but is very jolly.

A friend of the family, craftsman and practical philosopher. She resembles a sailor, and seems wise beyond her years in a similar way to Snufkin.

A young girl who was turned invisible, shy and speechless due to the sarcastic and cold treatment from her Aunt. She was made to wear a bell so that others could be aware of her presence. The Aunt decided she could not look after an invisible child and so left her in the care of Too-Ticky, who decided the best place for her was with the warm, loving Moomin family. Their kindness gradually turned most of her visible, and a spout of anger at Moomin Papa revealed her head, which had remained hidden for weeks. Too-Ticky returned to collect her, with her visibility, speech and confidence restored.

A strange and mystical character that glides through the ice and snow during winter. She has 3 legs and two arms, all of which have star shaped appendages on the end. Too-Ticky creates horses out of snow that the Lady magics to life in order to ride them through the sky. She has the power to freeze people with her gaze, and does so to Little My, who is soon thawed out by Too-Ticky and Moomin.

Several English language VHS releases were produced, and in 2005 a Region 2 DVD of the first five episodes, entitled "Moomin Mania" was released by Maverick Entertainment, but was discontinued.

The first 14 episodes of season one are available on DVD in the UK by STAX Entertainmenton 3 March 2008 and on 6 October 2008 a second DVD was released with episodes 15 to 27. When asked STAX have have said another 2 volumes are to be released in 2009 and hopefully another 2 the following year.

Differences from the books

This series has some differences from the books, more strongly than '80s The Moomins, but not as much as the first Japanese series from the '60s. Some notable differences include: 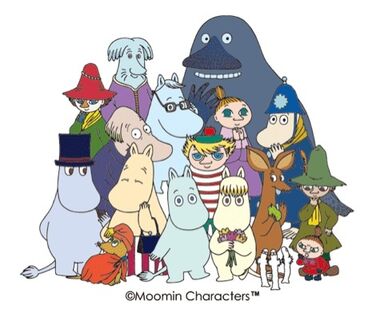 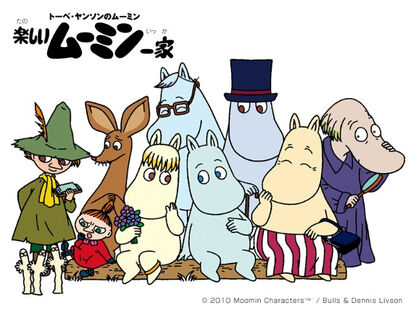 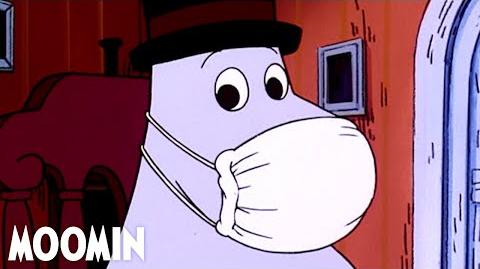 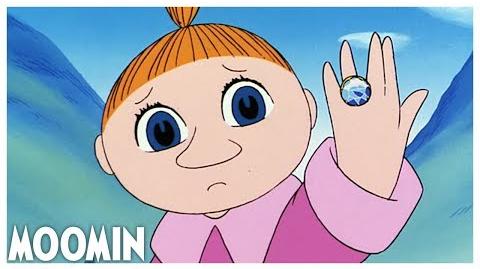 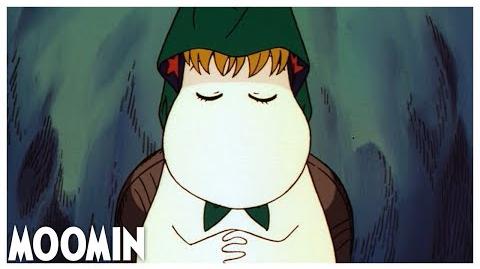 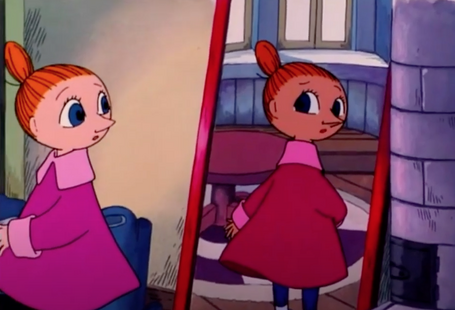 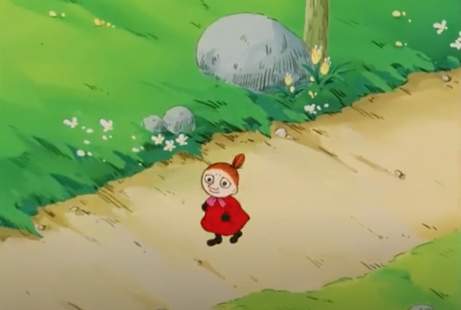 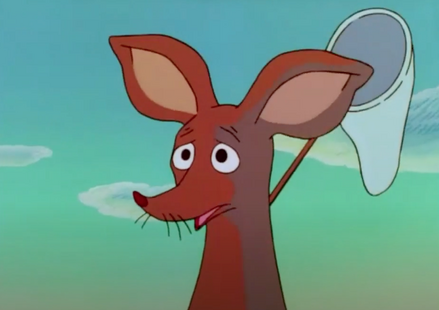 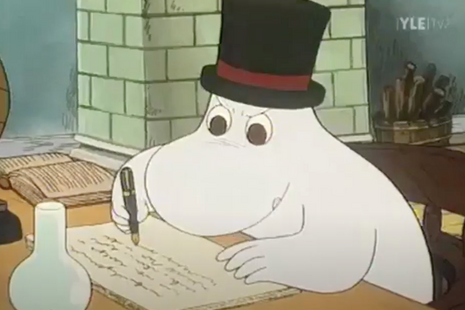