Moomin World (Finnish: Muumimaailma) is the Moomin Theme Park especially for children based on the Moomin books by Tove Jansson. Moomin World is on the island of Kailo beside the old town of Naantali, near the city of Turku in Western Finland.

The blueberry-coloured Moomin House is the main attraction. Tourists are allowed to freely visit all five stories. Hemulen's yellow house is located next to the Moomin House. It is also possible to see Moominmama's Kitchen, Fire Station, Snufkin's Camp, Moominpappa's boat, etc. in Moomin World. Visitors may meet Moomin characters there or the Witch in her cottage.

Moomin World isn't a traditional amusement park. There are many activities and fantasy paths for children there, e.g., Toffler's Path with Witch's Labyrinth, The Hattifatteners' Cave and The Groke's House. There are also performances in Moomin Theatre Emma.

Moomin World is open daily from mid-June to mid-August. The nearby Väski Adventure Island is also a special sight for children.

Moomin World is the world's fourth best theme park for children according to The Independent on Sunday (October 2005). Moomin World was elected as the domestic travel destination of 2005 (Matkamessut, Finnish Travel Fair 2006). Moomin World got the Golden Pony Award 2007 by The Games & Parks Industry magazine. The jury said: "Moomin World is welcoming, well themed and full of educational contents."

During the Pumpkin Summer of 2013.

During the Magic Winter event. 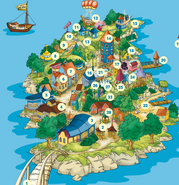 Retrieved from "https://moomin.fandom.com/wiki/Moomin_World?oldid=10227"
Community content is available under CC-BY-SA unless otherwise noted.