Moominhouse (Swedish: Muminhuset, Finnish: Muumitalo) is the home of Moominpappa, Moominmamma, Moomintroll, Little My and Sniff. It is located in Moominvalley.

Its tall, round shape is said to be based upon the porcelain stoves behind which the Moomins' ancestors used to live.

In Moominpappa's Memoirs it is revealed that the Moominhouse originally was the navigation hut on Oshun Oxtra, though after years of rebuilding, renovating and expanding the house, there are few traces of the original base left.

The Moominhouse is a large blue, three story building (and roof floor and basement), with a red roof. It has five access ways (overall windows not included): From the veranda, the front door, the kitchen door, the basement and Moomin's roof window with a ladder.

The Salon is accessed through the veranda and the front door. It also leads to the second floor and dining room. The Salon has a fireplace with plates as decoration, a table in the middle of the room with a pink tablecloth on a blue/green mat, a grandfathers clock, a couch under the window with blue curtains, a cabinet in the corner, a flower table by the dining room door, several small paintings and a mirror. Moominmamma's grandmother's chandelier hangs from the roof over the table.

The Dining Room is accessed from the living room and kitchen. It has a large table with a orange tablecloth, a large stove is located next to the kitchen door, and a blue cabinet next to a tree couch. Its has a green wallpaper with blue stripes.

The Kitchen is accessed from the kitchen door, dining room and basement hatch. There is a stove, a counter with all the utilities, a dish washing corner and a table in the middle. There is also a butter maker/barrel in the corner. Several plates are also staked on a shelf.

The Second floor has three rooms and is accessed from the first and third floor, by the stairs. Moominpappa & Moominmamma's bedroom is through the third door of the second floor. There is also a guest room.

The Moominhouse as seen in the anime.

The house during summer. 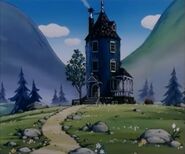 Little My outside the entrance to the basement.

The kitchen door, while Sniff and Little My are cooking.

Sniff in the guest bedroom. 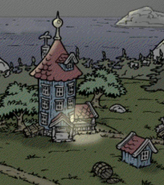 The Fillyjonk introduced to the salon.

The moominhouse, during a flood.

The stairs to the second floor under water.

Food is floating up from the basement in to the kitchen.

Sniff panicking as the water rises.

The tree Little My planted grows with great speed.

Turns out that the knocking was the tree.

The tree takes over the dining room and salon.

"Now listen you! You leave my husbands desk alone or you'll be sorry!"
Add a photo to this gallery
Retrieved from "https://moomin.fandom.com/wiki/Moominhouse?oldid=11338"
Community content is available under CC-BY-SA unless otherwise noted.