Moominpappa (Finnish: Muumipappa, Swedish: Muminpappan) is a Moomin married to Moominmamma and is the father of Moomintroll. Orphaned in his youth, Moominpappa is a somewhat restless soul who left the orphanage to venture out into the world but has now settled down, determined to be a responsible father to his family. He often spends his time writing down stories from his life to read to his friends and family.

Moominpappa looks like most other Moomintrolls, in that he is white and round with a large snout. resembling a bipedal hippopotamus with a thin, tufted tail. He is almost always wearing his black top-hat, inside which is painted, "M.P. from your M.M." to differentiate it from all the other top hats in the world. He also often carries around a black cane, though it appears to be more for the look of it as opposed to actual necessity. In the 1990 series, he is depicted with a slight bluish tint.

In his childhood, Moominpappa felt very misunderstood by the strict Hemulen headmistress at the orphanage, and, after falling down an ice-hole while admiring his own reflection, he decided to explore the world on his own and become a famous explorer.

He fled the orphanage and after wandering through a dark and scary forest he found a person sitting next to a water-wheel in a brook. The person presented himself as the inventor Hodgkins and told Moominpappa that he will use the water-wheel construction on his riverboat. Hodgkins then showed him the unfinished ship as well as his nephew, The Muddler, and friend The Joxter.

Together all four of them finished the boat, The Oshun Oxtra (the Muddler was supposed to write "The Ocean Orchestra"). They launched the ship by tricking Edward the Booble into overflowing the river. Then Moominpappa and his friends traveled downriver to the sea, where he saved the Hemulen's aunt from being eaten by the Groke, but she gets attacked by Niblings.

Thereafter they found an island where they befriended the Mymble's family and celebrated the King of the island's 100th birthday, where they all won prizes. Hodgkins got an offer by the king to become a court inventor, and Moominpappa stayed on the island, although he really wanted to go on more adventures with Hodgkins, and rebuilt the navigation hut of the Oshun Oxtra into a house for himself. Then Hodgkins constructed an upgraded version of their ship, able to travel through land, sea, and sky, and invited his friends on its maiden voyage. They got attacked by a sea-monster, but they saved when Edward the Booble accidentally stepped on it. Sometime later Moominpappa saved Moominmamma from drowning.

According to his family, he writes down all of his adventures in a book called "Memoirs". He once commented that because so many adventures happen to him, he might never finish the book. According to Moomintroll, Moominpappa can fix anything if he is able to get around to it. He sometimes feels a secret longing to live with the Hattifatterners, something that is explored in a short story in Tales from Moominvalley. He is also shown to be friends with most adventurous characters in Moominvalley, such as Wimsy, and even Stinky.

Moominpappa appears in the Moomin anime series from 1990-92. He is the husband of Moominmamma and the father of Moomin. All three live in the Moominhouse. 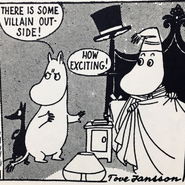