For the Moomins as a species, see Moomintrolls.

Moomintroll (Finnish: Muumipeikko or Muumi, Swedish: Mumintrollet, Japanese:ムーミントロール) is the main character in the Moomin books by Tove Jansson. He is a Moomitroll or Moomin and lives in the Moominhouse together with his father Moominpappa and his mother Moominmamma. He is best friends with Snufkin, and good friends with many others who live in Moominvalley, such as Snorkmaiden and Sniff, and often goes on adventures with them.

Have you met Moomintroll yet?

He’s an agreeable fellow who’s interested in everything he sees. The world is full of exciting things to investigate, but Moomintroll particularly loves collecting rocks and shells. He also loves the sea, as does the whole Moomin family.

Many visitors pop by the Moominhouse, and Moomintroll is always happy when he’s spending time with his friends. He has great faith in his friends and gets worried if one of them is unhappy. Moomintroll is very sensitive to himself, but he never bears a grudge.

Moomintroll thinks that Moominvalley is the safest and most interesting place in the world. That’s why he’s so curious and brave – he can fulfill his desire to understand strange things and weird creatures without the need to fear them. The only thing that makes Moomintroll feel bad is being left alone.

Moomintroll is a dreamer and a thinker, and the maverick vagabond Snufkin is his best friend. Every November, when Snufkin goes south for the winter, he leaves Moomintroll a special letter. In it, he promises to return to Moominvalley on the first day of spring.

Moomintroll loves Moominmamma and his family above all else. There’s no problem that Moominmamma can’t solve. And whenMoominpappa invents a good excuse for an adventure, Moomintroll is always eager to tag along. When Snorkmaiden becomes his girlfriend, Moomintroll learns that love can sometimes make you feel wistful and even downright sad.

We meet Moomintroll right away in the first Moomin book, The Moomins and the Great Flood. Moomintroll doesn’t reach adulthood during the Moomin stories, but he does grow up a lot in the book Moominland Midwinter.

Moomintroll is easily recognizable from his gentle, round appearance and the tuft on the end of his tail. All Moomins have large eyes and small ears.

Moomintroll looks like most other Moomintrolls with white fur and a hippopotamus-like big round nose. He is the only member of the Moomin family to not have any particular accessories or items of clothing associated with him.

Moomin is very kind and well-meaning, however, he is rather emotional and tends to be sad or worried a lot. He has a keen spirit of adventure and often follows wherever his friends take him.

In the comics, he is usually more unhappy or annoyed than in the novels. In the early books, he was dependent on others, for example, Moominmamma and Snufkin. This was especially true in the first novel where Moominmamma had to make all the decisions and fend for him and Sniff. Later however he becomes more independent and grown-up, most notably in Moominland Midwinter where he has to survive in the new environment of the harsh winter without his family.

His best friend is Snufkin, whom he adores for his carefree lifestyle. Moomin is the only one that Snufkin has ended rooting himself for, always coming back in spring to spend the year in Moominvalley until the next winter. Moomin has other friends, including Sniff, Too-Ticky, and Snorkmaiden, who are also friends of his family and sometimes stay with them in the Moominhouse. It is hinted many times that he is the romantic interest of Snorkmaiden, although their relationship is very innocent.

He has appeared in all Moomin books except Moominvalley in November, and in all other Moomin media. 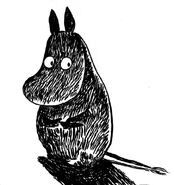 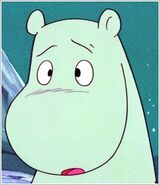 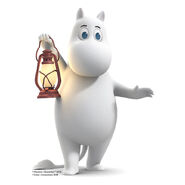 Moomintroll and Sniff in 1978