This article is about Mymble's Daughter. See Mymble for her mother.

Mymble's Daughter (Finnish: Mymmelin tytär; Swedish: Mymlans dotter) is a character in the Moomin series of books by Finnish author Tove Jansson. Later on Mymble's Daughter comes to be known as just Mymble. She is Little My's older sister. She is introduced in Moominpappa's Memoirs and later appears in The Book about Moomin, Mymble and Little My, Moominsummer Madness and Moominvalley in November. Mymble's Daughter is very independent and carefree. She has long legs, red rubber boots, and glossy reddish-yellow hair that she wears in a little topknot on her head.

"It's nice being a Mymble [Mymble thought]. I feel absolutely splendid from tip to toe." (--Moominvalley in November, chapter 6.) 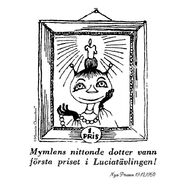 An early version of the character. Won first prize in a Saint Lucy competition held by finnish newspaper Nya Pressen in 1950.
Add a photo to this gallery
Retrieved from "https://moomin.fandom.com/wiki/Mymble%27s_Daughter?oldid=12204"
Community content is available under CC-BY-SA unless otherwise noted.