Sniff is Moomintroll's friend and later adopted brother. He is the son of the Muddler and the Fuzzy. He is one of the few characters in the Moomin series who is sincerely interested in money and is always on the lookout for another way to get rich quick. This trait in him is often played as a contrast to Snufkin, who doesn't care much about worldly belongings, and their two different philosophies sometimes clash -- although Snufkin is generally portrayed as the wiser of the two.

Particularly in the earlier books, Sniff seems to be younger than the other major characters, and many of his negative qualities can be said to be those of a thoughtless child; he is selfish, greedy and quick to push all responsibility over on other people, but he is not malicious or mean-spirited. He's also easily frightened or upset, and not very fond of taking risks, although he will often overcome his fears if there's a chance of treasure or wealth.

Sniff is one of the first characters introduced in the series; in fact, he is the first person Moomintroll and Moominmamma encounter on their journey in The Moomins and the Great Flood, although he has not yet been given an actual name and is referred throughout the story simply as "the small creature."

In the following book, Comet in Moominland, he gets his proper name and goes on to play a major role in both that book and in Finn Family Moomintroll, and he also plays a more minor role in The Exploits of Moominpappa wherein he together with Snufkin and Moomintroll listen to Moominpappa read from his memoirs, and at the end of the book finally meets his own parents for the first time in the series.

After this, possibly due to the lack of potential for character development or because he goes on to live with his parents, Sniff fades into the background and becomes a very minor character. His last appearance in the regular books is in Tales from Moominvalley, although he gets a fairly large role in the picture-book The Dangerous Journey, and has a minor speaking role in An Unwanted Guest.

Tove Jansson seems to have been unsure what to call Sniff when she first created him, as he is only called "the small creature" in the first book. In Comet in Moominland, he is named Sniff, but in the comic adaption of that story written for Ny Tid the same year, he is called "Rådd-djuret", the Swedish name for The Muddler. However, Jansson eventually settled on Sniff.

Sniff also appears in other Moomin-related media, usually as a semi-major character. 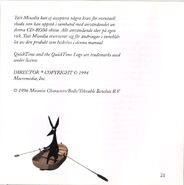 Retrieved from "https://moomin.fandom.com/wiki/Sniff?oldid=13588"
Community content is available under CC-BY-SA unless otherwise noted.