Snork (Finnish: Niisku; Swedish: Snorken) is a character in the Moomin books. In the books, the Snork is an ordinary person whose primary characteristic is his love of order and being in charge, but in the TV series, he is a professional inventor and scientist. Snork is always inventing things that are rare in the Moomin Valley. Snork's little sister is Snorkmaiden, which is Moomintroll's valentine. He likes things to be organized and often writes things down in his notebook.

Snork is not only Snorkmaidens brother, but also the whole of its kind to their name.

The original Tove Jansson in the Moomin books wrote about the Snork species being closely related to Moomins. The Snork in the books also changes color according to emotion.

Moomintroll first met the Snork and the Snork Maiden in the second Moomin book, the 1946 novel Comet in Moominland. As Moomintroll, Snufkin, and Sniff travel to the Observatory to learn about the approaching comet, Snufkin mentions that he met a couple of Snorks a few months ago. When Moomin asks what Snorks are, Snufkin is surprised:

"Don't you really know what a Snork is?" said Snufkin in amazement. "They must be the same family as you, I should think, because they look the same, except that they aren't often white. They can be any colour in the world (like an Easter egg), and they change colour when they get upset."

Moomintroll looked quite angry. "Well!" he said. I've never heard of that branch of the family. A real Moomintroll is always white. Changing colour indeed! What an idea!"[1] 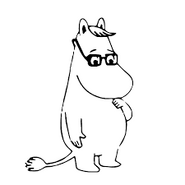 Retrieved from "https://moomin.fandom.com/wiki/Snork?oldid=13435"
Community content is available under CC-BY-SA unless otherwise noted.