Snorkmaiden (Finnish: Niiskuneiti, Swedish: Snorkfröken) is a character in the Moomin series of books by Finnish author Tove Jansson. She is a member of the species known as Snorks and is the sister of the Snork. She is Moomintroll's friend and playmate, sometimes seeing him as her prince charming, although their relationship is very innocent.

Her appearance is very similar to the Moomintrolls, being round and furry, with a large snout that resembles that of a hippopotamus.

Snorkmaiden differs from the Moomins by having a curly fringe of hair at the front of her head, of which she is very proud. All Snorks change color with their moods, although this is only mentioned in two books, Comet in Moominland and (very briefly) Finn Family Moomintroll. When Snorkmaiden is upset, she turns bright green.[1]

She wears a little gold anklet and likes to wear a flower behind her ear (usually in a color that complements her current body color).

In the Stop-motion Television Series she wears a gold earring in her left ear.

Snorkmaiden is very loyal to her friends and somewhat emotional. She is seen to be quite energetic and often changes her mind and acts impulsively. She is brave and warm-hearted, despite sometimes coming across as selfish or vain, due to wanting to take care of her appearance.

Snorkmaiden likes stories and often daydreams, acting out stories with Moomintroll and other friends and enjoying Moominpappa's tales.

She is a good cook and is able to make a fruit soup using fruit and lemonade and make a cure for stomach aches.

Snorkmaiden then appears, without the Snork, in Moominsummer Madness - where she and Moomintroll are separated from the family for most of the book, and is asleep throughout Moominland Midwinter. Finally, she makes appearances in two of the stories in Tales from Moominvalley: the fourth, "The Last Dragon in the World", and the ninth and final story, "The Fir-Tree". She is not part of the family in Moominpappa at Sea, and no account is given of when she left, though Moomintroll briefly mentions her on at least one occasion.

Snorkmaiden is a protagonist in the series of three short films. In this incarnation, she has hair, she is wearing a bow on her head and she is wearing a dress. She has freckles on her nose. In the third short, she is seen wearing a large fashionable dress for a brief time.

Snorkmaiden is one of the protagonists in the Moomin anime series from 1990-92, in which she is known as Floren. She is the little sister of Snork and they both live in the Snork Residence. 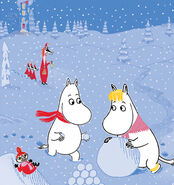 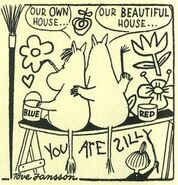 Snorkmaiden in Moomins on the Riviera 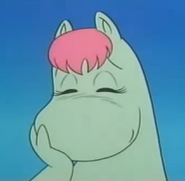