View source
watch 01:54
Obi-Wan Finale - The Loop
Do you like this video?
Play Sound

Snufkin (Finnish: Nuuskamuikkunen, Swedish: Snusmumriken, Japanese: スナフキン) is Moomintroll's best friend, who goes south every winter and returns in the spring. He is the son of the Mymble and the Joxter, and is half-brother to the Mymble's daughter and Little My. Snufkin is an adventurer and a vagabond, admired by those who are small and shy.

Snufkin wears old green clothes and a wide-brimmed hat he's had since birth. He lives in a tent, smokes a pipe, and plays the harmonica, although he is shown to play the flute, the accordion and the guitar as well. Snufkin also has a great dislike for authority figures such as the Park Keeper, and the many regulation signs and fences he puts up, and as such is often thought of as an anarchist. At one point he sabotages The Park Keeper by planting Hattifatteners in his garden, causing them to grow and drive him out.

Snufkin prefers freely-growing foliage to fenced-in lawns. He keeps as few worldly possessions as possible, seeing them as a burden, and being happier keeping the memory of a thing than the thing itself. This aspect of his personality is contrasted in the character of Sniff.

Snufkin is a philosophical vagabond who wanders the world fishing and playing the harmonica. He carries everything he needs in his backpack, as he believes that having too much stuff makes life overly complicated.

Snufkin is easygoing and carefree and enjoys thinking about things. He always comes and goes as he pleases. He has plenty of admirers in Moominvalley, especially among the smaller and more timid inhabitants. Moomintroll is his best friend and Little My is his half-sister. Snufkin is also the son of the Mymble and the Joxter.

Snufkin meets every new person and event with curiosity and a warm heart. He enjoys spending time with the Moomins in Moominvalley, but in November he always goes south for the winter, only returning to Moominvalley in the spring.

The enigmatic Snufkin does not avoid other people’s company, but he does prefer to travel alone. On his journeys, he explores new places and tries his luck at fishing. Snufkin loves to go wandering at night and especially in the moonlight. He never asks the names of the new places he visits, but simply enjoys the journey itself.

Snufkin always wears a dark green hat with a wide brim and a similarly coloured, shabby old coat. He first joins the Moomins on their adventures in the book Comet in Moominland

Snufkin appears in the following books:

Snufkin also has cameo roles in the picture-books Who Will Comfort Toffle?, The Dangerous Journey and also in An Unwanted Guest. He is also generally a prominent character in other Moomin media, such as comics and TV series.

He is absent from The Moomins and the Great Flood, The Book about Moomin, Mymble and Little My, Moominland Midwinter and Moominpappa at Sea, though he is at least mentioned in both the latter books. 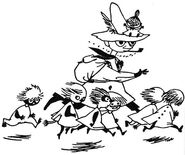 Snufkin and Little My with the unnamed children 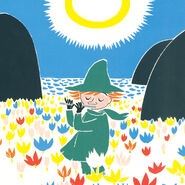 Appearance in 'Who Will Comfort Toffle?' 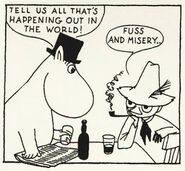 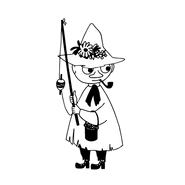 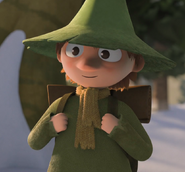 Snufkin in the 2019 series, Moominvalley

Snufkin in Moomins on the Riviera

Snufkin and Moomintroll in 1959 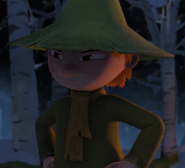 I feel like more people should see this picture so here you go.
Community content is available under CC-BY-SA unless otherwise noted.
Advertisement