Large size, wide mouth
The Groke (Finnish: Mörkö, Swedish: Mårran) is a fictional character in the Moomin world created by Tove Jansson. She appears as a ghostlike hill-shaped body with two cold staring eyes and a wide row of white shiny teeth.

In the book Who Will Comfort Toffle?, it is mentioned that she has a tail, but it has never been seen. Wherever she stands, the ground below her freezes and plants and grass die. She leaves a trail of ice and snow when she walks on the ground. Anything she touches will freeze: for example she once froze a campfire by sitting down on it. She seeks friendship and warmth, but she is declined by everyone and everything, leaving her in her cold cavern on top of the Lonely Mountains.

On one occasion in a comic, however, she was hailed as a hero when she, in her constant search for warmth, extinguished a forest wildfire by sitting on it. The Groke is both a live representation of loneliness and a psychological depiction of very lonely people who have a hard time accepting and expressing love in the right way, making them seem cold and scary to others, which, in turn, only leads to more loneliness. She is quite scary to some readers.

Books she appears in

There have been various adaptations of the Moomin books on TV. The Groke appears in many of these.Tove Jansson

This version of the Groke was all-black and resembled the 1990 Groke, but was far more comedic in nature, with one scene including her sticking out her large, green tongue and comically screaming at Moomin, only to then lick a strange thing he had on his face covered in mustard and screamed even more because she did not like the taste of it. Here, she was referred to "Licky-Licky".

The Polish series features the Groke in several episodes. She is portrayed far more menacingly, making creepy sounds that resemble loud uncanny hissing (Original Polish version) or growling (English broadcast). For the most part this Groke lacks her trademark smile and arms, that only appear when she's attacking someone or tries to grab something. The Polish Groke has large, black eyes with glowing pupils that change colour depending on the Groke's emotions.

The Soviet Magician's Hat has what is considered by many the strangest interpretation of Groke in Moomin history - this version of the Groke is much smaller than any others, has very long grey fur, a nose, and laughs and speaks. She also wears a hat and can turn into a flower and even fly, making strange sounds while doing so. She also has very large feet.

Who Will Comfort Toffle? (short film)

This short film features Groke as very tall, grey, and having a very big nose, even larger than other interpretations of her.

The Japanese anime series Moomin has her as a recurring character. Apart from her intimidating appearance, the loud growling sounds she utters contributed to this effect. As well as her malevolent theme music, which begins to play every time she appears. The Groke's primary introductions were in episode 6 and 20 of the series. Especially in her first episode, the dark image and her growling spooky voice were seen as too frightening for some children which might be why the Groke appears with brighter colous and a more relaxed expression in the next episode. It was not until episode 37 that children could start seeing the Groke more sympathetically.

The Groke as she first appeared in Finn Family Moomintroll 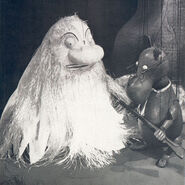 In the 1990 Japanese animated series

In the 2019 adaptation
Add a photo to this gallery

Retrieved from "https://moomin.fandom.com/wiki/The_Groke?oldid=13517"
Community content is available under CC-BY-SA unless otherwise noted.