View source
watch 01:54
Obi-Wan Finale - The Loop
Do you like this video?
Play Sound

The Joxter (Finnish: Juksu; Swedish: Joxaren) is a character who appears in the Moomin book "Moominpappa's Memoirs", earlier named "The Exploits of Moominpappa". The book is about Moominpappa, who tells Moomintroll ,Snufkin and Sniff about his youth, and the Joxter is one of the friends Moominpappa talks about in the book.

As also explained in the book that Joxter is Snufkin's father.[1]

The Joxter is described as being very lazy and worry-free, explaining once that the perfect life for would be to live in a fruit tree and eat the fruit as it grows. He occasionally has premonitions, which he calls "Forebodings", which lets him know if something bad will happen.

He also has a dislike for authority figures, a trait he shares with his son Snufkin, as well as other family members. In the book, Joxter even goes as far as to say the last time he heard from his family they were at war with a park keeper. (This is also a tradition Snufkin seems to continue).

Joxter also has or had a relationship with The Mymble, which in turn resulted in Snufkin's birth. 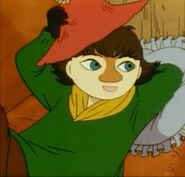 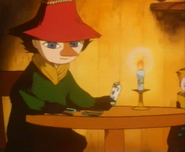 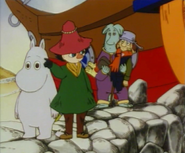 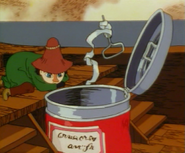