The Muddler (Swedish: Rådd-djuret) is Sniff's father and Hodgkins' nephew, appearing in Moominpappa's Memoirs. His parents were lost in a thorough housecleaning. He is married to the Fuzzy. The Muddler is one of Moominpappa's oldest friends, who accompanied him together with Hodgkins and the Joxter on the Oshun Oxtra. His behaviour is similiar to that of Sniff, but instead of desiring valuable and precious possessions, he finds high value in worthless junk, which has a high personal value instead of a monetary value. Like Sniff, The Muddler has little interest in adventure and danger, and gets easily freightened and nauseous. However, he is a very enthusiastic person filled with love for both his belongings and others. It is a great honour for him to paint Hodgkins' boat, he quickly befriends the Nibling and when he meets the Fuzzy, they marry before any of their friends even has time to get invited to the wedding. The Muddler lives in a Maxwell House Coffee tin, where he collects all his belongings.

It is possible that Hodgkins' lost brother is the Muddler's father, since both Hodgkins brother and The Muddler's parents are missing.

Unlike Moominpappa's other childhood friends, the Muddler actually appears outside the memoirs. He appear in the Moomin comic strips, and also has a major role in the 1969 swedish television series Mumintrollet, which was co-written by Tove Jansson and her brother Lars. In the comics there also appeared an identical son of him, called the Fuddler, with a very similar personality. 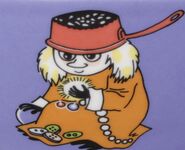 Add a photo to this gallery
Retrieved from "https://moomin.fandom.com/wiki/The_Muddler?oldid=12629"
Community content is available under CC-BY-SA unless otherwise noted.